Chart of the Day, 6 March 2015: Global Food Prices and Production

Yesterday, I highlighted the tail risk of climate change; that is, low probability but high impact outcomes that could devastate the planet.

Nonetheless, while climate change is already showing up as biodiversity stress, it is not yet appearing as an aggregated agricultural impact across the globe. True, we can produce regional examples of likely climate change-induced distress. For example, climate change probably (but not certainly) helped tip the odds toward the strong western United States drought that we have been witnessing. This, in turn, has affected certain types of crop. But climate change has yet to have a material impact on global food production in its entirety.

Below is the composite Food Price Index from the Food and Agriculture Organisation (FAO). Data source here (click for larger image).

Real inflation-adjusted food prices are currently not far off their 1960s/70s levels. True, they are up about 40% from 20 years of so ago, but the world has got a lot richer since then. Indeed, Chinese real GDP per capita has more than doubled over the last 10 years and India’s same statistic is up about 60%.

Moreover, despite new global temperature records being made over the last few years, cereal production continues to trend upward (click for larger image): 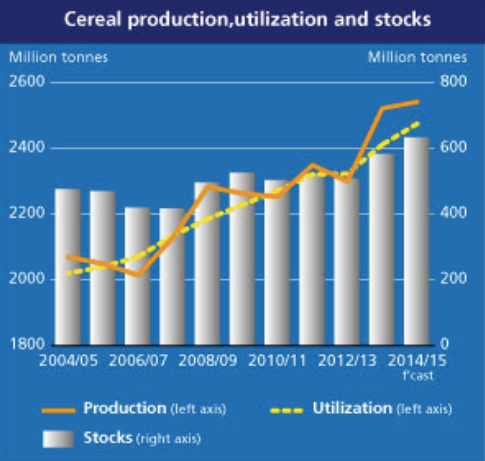 Finally, with production up and the relative price of food to income down, malnourishment has also been on the decline (click for larger image): 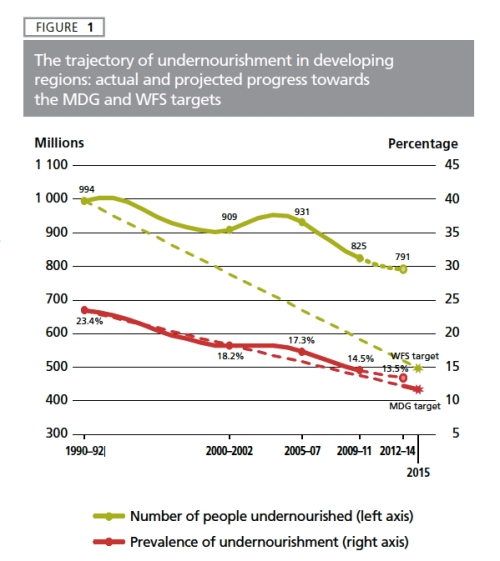 The 1996 World Food Summit target of halving the number of undernourished people by 2015 has not been met, but the trend has definitely been down. And given that the global population has been growing, the percentage of undernourished has nearly halved (Source: State of Food Insecurity in the World 2014).

So the fingerprints of climate change on food security are still barely visible. But given current CO2 emission projections, the day will come when this all changes.

Like Loading...
This entry was posted in Climate Change, Resource Constraints and tagged FAO, FAO Food Price Index, Food and Agriculture Organization, State of Food Insecurity in the World. Bookmark the permalink.

2 responses to “Chart of the Day, 6 March 2015: Global Food Prices and Production”