Apologies for my blogging hiatus: I’ve been otherwise engaged for the last few weeks in academic activities, some economics consulting and (most timing consuming of all) grassroots campaigning in the run-up to the UK general election.

I am not a natural ‘party political animal’, being too eclectic in my ideological views. Indeed, I like bits of each party manifesto but find other parts bonkers. Nonetheless, being back on home turf for an election for the first time in over 15 years, I wanted to get involved.

My own personal ‘wedge’ issues in this election were twofold: climate change (as would be expected from this blog) and anti-austerity. Climate change is still, to me, the central risk of our times. It has the potential to overturn everything within my children’s lifetime, not least of which is democracy itself. Unfortunately, neither climate change nor the environment in general feature in the top 10 concerns of the UK public (click for larger image): 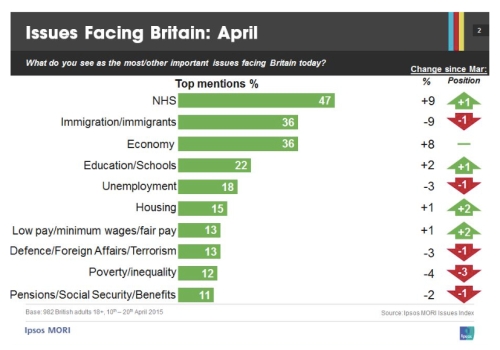 Of the five main political parties that competed in the UK general election–the Conservatives, Labour, Lib-Dem, UKIP and Green–three have an aggressive commitment to act over climate change (Labour, Lib-Dem and Green). Unlike the Republican Party in the US, the Conservatives have in the past also had a forward-looking approach to carbon emission mitigation (as evidenced by their continued support of the UK’s Climate Change Act). The leadership, has, however, grown increasingly lukewarm over leading on the climate-change issue.

With regard to austerity, my stance is more nuanced. In short, why prioritise reducing debt at a time when interest rates on long-term government debt are at rock bottom levels? The following chart is taken from the Bank of England‘s latest “Inflation Report” published on the 13th May, 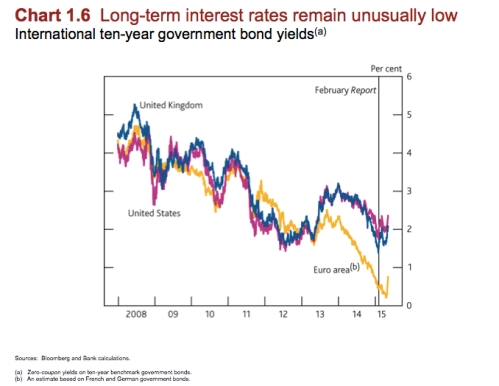 And from the same report, the Bank of England‘s inflation projection: 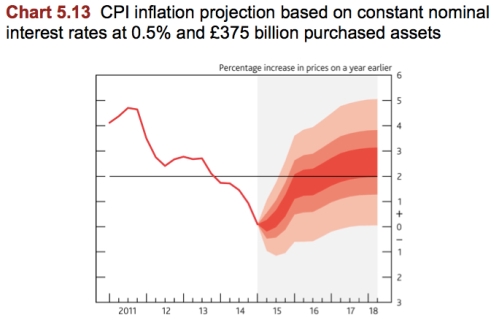 Put the two together and we give the government the capability to borrow at a zero real interest rate. This, to me, provides a heaven-sent opportunity to embark on a massive round of infrastructure spending covering renewable energy, low carbon transport and housing. In short, a chance to increase well-being and address sustainability–what is not to like?

At this stage, some will argue that low real interest rates are the result of past austerity. To this, I would say: look at France. The French economy is frequently characterised by the UK right as a sclerotic basket case mired in red tape, overtaxation and and out-of-control public spending. Yet France has one identical characteristic to the UK: rock bottom real interest rates. Indeed, low real interest rates appear common to governments of the centre-left and centre-right. This would indicate that something secular is going on as I’ve referenced in past posts (here and here).

Unfortunately, the electoral debate rarely strayed beyond the narrow confines of material aspiration. Climate change, demographics, technology, the changing nature of capital and work–none of these topics were considered.

The Green Party probably came the closest to taking an innovative look at our very 21st century problems. Disappointingly, the Green Party also incorporates many influential members who have a very 19th century approach to political discourse. I would have hoped that nowadays we could take a less binary approach to assessing the benefits of market economics. Frequently, though, it is still viewed as either saviour (the Conservatives) of Satan (large elements of both the Green and Labour parties). Finally, I ended up campaigning for the Greens purely because my concern (fear) over climate change trumped my doubts over the Greens’ ability to advance a coherent economic alternative to the current status quo (although they were anti-austerity).