Are You Thriving, Struggling or Suffering?

In my first post on that hugely exciting field of happiness studies (here), I had a look at the Cantril Ladder, a measurement system for quantifying life satisfaction that was pioneered by the psychologist Hadley Cantril.

The most comprehensive set of data relating to the Cantril Ladder is collected by Gallup, and an explanation  of their methodology is given here. The data are collected after the posing of the following question via face-to-face and telephone interview in 146 countries worldwide. How about scoring yourself?

On which step do you think you will stand about five years from now? 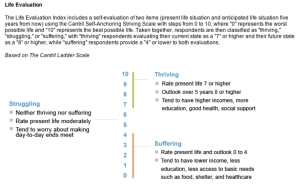 The Gallup organisation also explains the characteristics of each group:

Thriving — wellbeing that is strong, consistent, and progressing. These respondents have positive views of their present life situation (7+) and have positive views of the next five years (8+). They report significantly fewer health problems, fewer sick days, less worry, stress, sadness, anger, and more happiness, enjoyment, interest, and respect.

Struggling — wellbeing that is moderate or inconsistent. These respondents have moderate views of their present life situation OR moderate OR negative views of their future. They are either struggling in the present, or expect to struggle in the future. They report more daily stress and worry about money than the “thriving” respondents, and more than double the amount of sick days. They are more likely to smoke, and are less likely to eat healthy.

Suffering — wellbeing that is at high risk. These respondents have poor ratings of their current life situation (4 and below) AND negative views of the next five years (4 and below). They are more likely to report lacking the basics of food and shelter, more likely to have physical pain, a lot of stress, worry, sadness, and anger. They have less access to health insurance and care, and more than double the disease burden, in comparison to “thriving” respondents.

The Top 20 countries ranked by the ‘Thriving Index’ are headed by Denmark at 74% (see here). Interestingly, Ireland is well within the Top 20 despite its brutal economic beating during the credit crisis. Japan, surprisingly, comes in mid-table with only 26% of respondents categorised as ‘thriving’ despite the country’s high per capital GDP and wealth.

The EU’s southern tier countries are—perhaps as expected—well down the table, with Italy registering a ‘Thriving’ score of 23%, Spain 39%, Portugal 14%, Greece 16% and Cyprus 44% all as of the spring of 2011. I wonder how low these scores will go at the next poll after consecutive years of austerity. 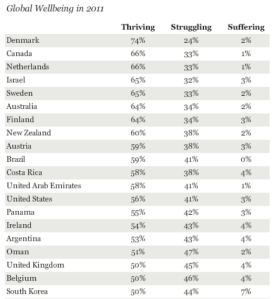 While the self-evaluation of happiness data is fascinating, it begs a lot of questions. Is it culturally centred, so perhaps the Japanese come across more gloomy than they really are? What factors make one decide that one is ‘thriving’? How does self-evaluation of wellbeing move through time. I will returns to all these questions in future posts. 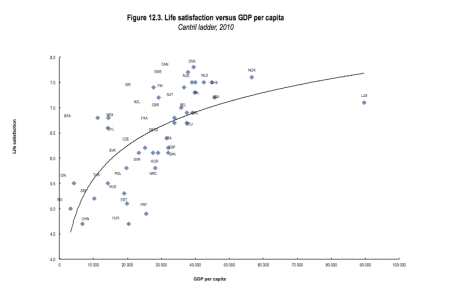