The Club of Rome, Skeptics and Myths We Believe

On Wednesday I attended a Cafe Scientifique talk in my home town of Henley. The presentation was on peak oil theory and given by Professor Chris Rhodes (who blogs at Energy Balance).

While the talk was of interest itself, what jumped out at me the most was one of the questions within the Q&A session. It went along the lines:

We have seen forecasts of future resource scarcity before, but in reality technology and the market have shown such forecasts to have been ridiculous. Didn’t the Club of Rome predict that the oil would run out 50 years ago?

At the mention of the Club of Rome, there was a general nodding of heads and murmur of approval.

At this point, I need to give a bit of an explanation of what Cafe Scientifique does and the kind of people attending (for those unfamiliar with the organisation). Its aim is to foster debate on the scientific and technological issues of the day within a non-academic context. Cafe Scientifique, and its sister organisation Skeptics in the Pub, attract a certain kind of person: highly educated, numerate and questioning. Many of them view themselves as “skeptics” (or “sceptics” if you like) in the original sense of the word (before the rise of the “climate skeptic”); that is, individuals who will not accept a proposition as a fact until it is subject to analytically robust evidence-based testing. Accordingly, I believe that few in the room didn’t have a science or numerate-based degree, and many had advanced degrees.

With this is mind, the statement within the Q&A session that the Club of Rome had predicted the world would soon run out of oil and other resources appeared to be taken as a fact by all those highly educated and very “skeptical” people. Except, of course, it isn’t a fact—it is pure fiction.

Luckily, anyone can prove my claim as true or false in a very simple manner (without resort to a discussion on the nature of truth): he or she can read the book (second hand copies of the original are available via Amazon here).

I will take you through the relevant pages and passages to prove my point; but I again stress: if you don’t believe me, read the book.

The report for the Club of Rome, called The Limits to Growth, was written by a team of researchers at MIT who attempted to model the interaction between earth systems and human systems. The second chapter of the book is entitled “The Limits of Exponential Growth”, and this chapter has seeded one of the most tenacious and insidious urban myths.

The Limits to Growth team included a “what if” table to illustrate the thesis. This table (Table 4 in the book), labeled ‘Nonrenewable Natural Resources’, sets out the number of years a select group of resources will last based on various assumptions (click for larger image). 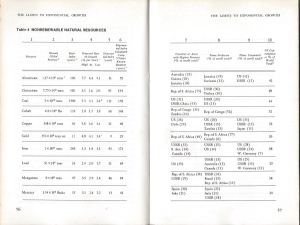 But it is critical to understand that these are not predictions; the authors are explicit about this point (page 63):

Of course the actual nonrenewable resource availability in the next few decades will be determined by factors much more complicated than can be explained by either the simple static reserve index or the exponential reserve index.

And as for the criticism by the economics profession that resource depletion studies do not take into account technology and price:

We have studied this problem with a detailed model that takes into account the many interrelationships among such factors as varying grades of ore, production costs, new mining technology, the elasticity of consumer demand, and substitution of other resources.

In the same chapter, the authors also present a case study for chromium. For this metal,  a static index of 400 years and an exponential index of 95 years is calculated. A more advanced model for chromium is also described in the book which takes into account the extraction cost per unit of resource, the advance of mining and processing technology and the fraction of the original reserve that is shifted to a substitute resource. The book then explains how consumption of chromium will move through time:

At first the annual consumption of chromium grows exponentially, and the stock of the resource is rapidly depleted. The price of chromium remains low and constant because new developments in mining technology allow efficient use of lower and lower grades of ore. As demand continues to increase, however, the advance of technology is not fast enough to counteract the rising costs of discovery, extraction, processing and distribution. Price begins to rise, slowly at first and then very rapidly. The higher price causes consumers to use chromium more efficiently whenever possible. After 125 years, about 5% of the original supply is available only at prohibitively high cost, and mining of new supplies has essentially fallen to zero.

Critically, a skeptic may be able to find fault empirically (perhaps The Limits to Growth is too pessimistic about the advance of technology), but they cannot criticise them for being unaware of price or substitutability. It is also important to note that the authors are not actually saying chromium will “run out” after 125 years. In their words, the “use of the resource is economically feasible” for 125 years—so after 125 years the resource becomes economically unfeasible to extract even if it still remains in the ground (that is, it hasn’t actually run out). 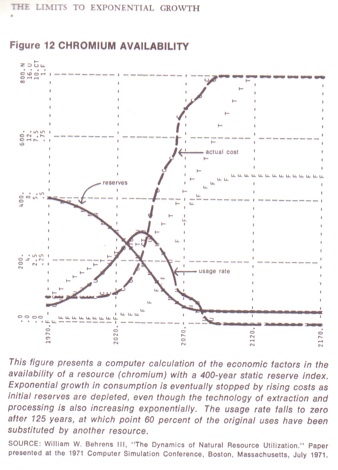 Is there a prediction within the Club of Rome’s Limits to Growth?  Yes, actually there is (page 66):

Given present resource consumption rates and the projected increase in these rates, the great majority of the currently important nonrenewable resources will be extremely costly 100 years from now.

So now we have a truly testable proposition: the majority of nonrenewable resources will be extremely costly in the year 2072.

So, according to the Club of Rome, [petroleum] reserves should have been overdrawn by 50 billion barrels by 1990. In fact, by 1990 unexploited reserves amounted to 900 billion barrel — not accounting the tar shales, of which a single deposit in Alberta contains more than 550 billion barrels. The Club of Rome made similarly wrong predictions about natural gas, silver, tin, uranium, aluminium, copper, lead and zinc.

The concept of wrong predictions made by The Limits of Growth had become so widespread and entrenched that often it was not even necessary to provide details.

In short, when evaluating The Limits to Growth, even the “skeptics” have been happy to suspend their skepticism. Why should this be? Bardi speculates:

What we can say for sure is that the denigration action against The Limits to Growth was extremely successful because it played on some innate characteristics of the human mind; in particular to our tendency of believing what we want to believe and disbelieving what we do not want to believe. It is, in the end, the Cassandra Effect (and, of course, Cassandra was right).

The urban myth surrounding The Limits to Growth may be exceptionally hard to kill, but I would hope that any true “skeptic” would never disseminate the myth once becoming acquainted with the actual facts. One lives in hope.

Like Loading...
This entry was posted in Peak Oil, Resource Constraints and tagged Cafe Scientifque, Chris Rhodes, Skeptics in the Pub, The Club of Rome, The Emissions Gap Report, The Limits to Growth, Ugo Bardi. Bookmark the permalink.

5 responses to “The Club of Rome, Skeptics and Myths We Believe”