The numbers are good (although less so from a climate change perspective), but far from revolutionary. A look at the U.S. data in a global perspective gives rise to considerable concern.

Crude oil is an internationally traded good, so the U.S. production numbers have to be taken in the context of global production. Latest numbers released by the International Energy Agency (IEA)  in its Oil Market Report on February 13th show fourth-quarter global production (which includes NGLs and ethanol) at 91.4 million barrels per day, up 2.2% year-on-year. 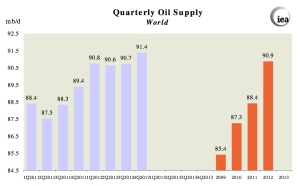 To put this in perspective, the International Monetary Fund’s World Economic Outlook Update published on January 23rd estimates global output growth of 3.2% in 2012 and forecasts growth of 3.5% in 2013 and 4.1% in 2014. The Centre for Global Energy Studies calculates that the oil intensity of GDP has been declining by around 1.5% per annum over the last few decades. This suggests that an oil supply increase of around 2% is necessary to secure global GDP growth rates of 3.5% going forward. The three critical determinants of supply are price, geopolitics and technology.

We can do a reality check is to whether the application of new fracking technology pioneered by the U.S. has recently become the dominant driver of oil supply by checking on the oil price (the EIA maintains a user-friendly oil price data set here, click for larger image).

Overall, the substitution out of oil into other energy sources (such as natural gas) at the high oil price of the last decade (elasticity of demand) and the introduction of new sources of supply (including tight oil in the U.S.) at the high price (elasticity of supply) have only been sufficient to stabilise real oil prices at historically high levels. In short, fracking technology in the U.S. has to date just contributed to preventing a bad situation getting worse. A genuine ‘revolution’ would be required to remove the supply constraint and bring prices down. Moreover, given that oil resources with cheap extraction dynamics continue to suffer depletion, the next move in real prices could easily be upward.

In conclusion, the claim by energy conucopians that the fracking ‘revolution’ is consigning the peak oil theorists to the dustbin of history is grossly premature.