Apologies for the late reporting of this number; my brain has been occupied with job-eating robots and computers for the last few weeks (and another post on this theme to come).

Apart from getting the latest monthly US natural gas number, I also want to do a quick catch up on The Energy Information Administration (EIA)’s “Annual Energy Outlook 2014″, which came out in mid-December and the “Short Term Energy Outlook” that came out on January 7th with new 2015 numbers.

But first the monthly number: the US government agency the EIA issues data on U.S. natural gas production, including shale gas, on a monthly basis with a lag of roughly two months. The latest data release was made on January 7th, and covers the period up until end-October 2013.

Since the end of 2011, production growth has stalled (click chart below for larger image), with the year-on-year 12-month average now flat-lining.

To put the current price of $4.5 per million Btu in perspective, a longer term monthly time series going up until end December 2012 is given below (click for larger image).

Looking at the two charts together, it is easy to observe some trends rarely pointed out by the mainstream media. First, up until 2000, natural gas prices had been flatlining around $2 per million Btu for a couple of decades. Accordingly, at the current price of $4 to $4.5, we are at a level double a little over a decade ago in nominal non-inflation-adjusted terms and over 50% in real inflation-adjusted terms. Shale gas has not given the U.S. an abundant supply of cheap gas, it has just given the country less expensive gas than otherwise (although certainly less expensive that in Europe or Japan).

Second, many media reports cherry pick the two $10 plus spikes as the comparison points when looking at today’s price. However, natural gas has a very inelastic short-term supply curve and has always shown short-term volatility. Taking a 12-month moving average gives a better idea of the underlying economic attractiveness of natural gas for investors—and the smoothed price averaged around $6 over the mid-2000s. Putting these facts together, we can say that shale gas production forced natural gas prices down a lot from their mid-2000 smoothed peaks but it has in no way restored the cheap gas status quo that existed prior to 2000. In short, we are not living in a brave new world of abundant natural gas—price tells us that.

The EIA also sees little change in price or volume of production going forward. The agency’s latest “Short-Term Energy Outlook” (STEO) was issued on January 7th and contains new forecasts going out until end 2015. According to their numbers, the Henry Hub price is to remain flat for the next two years at around $4, while production will increase 2.1% in 2014 and 1.3% in 2015 (click for larger images for the charts below).

For a longer term perspective, we can refer to the early release of the Annual Energy Outlook 2014, which was published on 16 December 2013. This shows a production take-off in 2016 to give a second leg to the shale gas story: 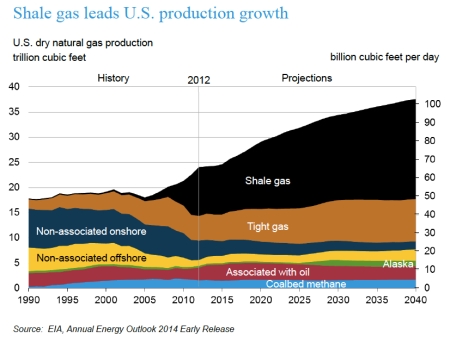 Some of the new production is going to replace imports and some will be directed toward exports (both by pipeline to Mexico and by LNG carrier to further afield):

Indeed, the January 2014 STEO has this to say about LNG:

LNG imports have declined over the past several years because higher prices in Europe and Asia are more attractive to sellers than the relatively low prices in the United States. Several companies are planning to build liquefaction capacity to export LNG from the United States. The first of the new facilities to liquefy gas produced in the lower-48 states for export is expected to partially come online in the fourth quarter of 2015.

Growing domestic production over the past several years has replaced pipeline imports from Canada, while exports to Mexico have increased. EIA expects these trends will continue through 2015. EIA projects net imports of 3.0 Bcf/d in 2014 and 2.5 Bcf/d in 2015, which would be the lowest level since 1986. Over the longer term, the EIA Annual Energy Outlook 2014 projects the United States will be a net exporter of natural gas beginning in 2018.

With rig count not telling us much about anything anymore (see, for example, here), it is exceptionally difficult to verify whether production will pick up speed again from 2016 as per the EIA viewpoint. That said, statements out of Peter Voser, the departing head of Shell, hardly suggest that the industry is all fired up and ready to take production up to the next level; for example, read  these excerpts from The Financial Times:

“Unconventionals did not exactly play out as planned,” Mr Voser said.

Just last month, Shell said it had put its acreage in the Eagle Ford shale in Texas up for sale, as part of a strategic review of its US shale portfolio.

Mr Voser said Shell’s Upstream Americas business was in the red because of a “strategic decision to slow down” on shale in the face of low gas prices. “Therefore you are hit with more than $3bn of depreciation whilst you don’t have the revenues against it,” he said.

He also acknowledged that exploration results in the US shales had been disappointing. “We expected higher flow rates and therefore more scalability for a company like Shell,” he said.

I have blogged extensively on the overblown claims for shale gas previously (here, here, here and here), with even President Obama amplifying the hype, and am fascinated as how this story will play out over the next 24 months.